The Athletic Highlights Edyoucore’s Program with the Baltimore Ravens

Ravens players are preparing for off-field success too; An inside look at their financial literacy class

OWINGS MILLS, Md. — More than a dozen Ravens, mostly second- and third-year players, shuffled into a spacious meeting room early one morning last month at team headquarters, a teammate hobbling in late on crutches. They had come in earlier that day than required, voluntarily, to attend this meeting.

What could garner nearly 100 percent attendance among these pro sophomores and juniors to wake up early? Money class, or the “Ballin’ On a Budget” seminars designed for them. Five previous sessions in, this series for the second- and third-year players attracted similar attendance, including big names like Lamar Jackson to those low down on the roster.

One of the first slides they viewed showed a picture of former NBA star Antoine Walker, a spokesman for the firm making the presentation, and the following stats: Career earnings $112,000,000; net worth (in red) -$7,950,000.

“To make that much money in your career and just see that all go down the drain is mind-boggling,” said Ravens linebacker Tyus Bowser, speaking after the session.

“We are as young guys, they want to spend our money,” he said of friends, families and solicitous business partners. “The amount of money that we have, we have to invest in the right things and should not spend it on unnecessary things.”

Walker is one of the most high-profile athlete financial busts, but there are scores of others. Former Redskins running back Clinton Portis declared bankruptcy in 2015, and just this month federal prosecutors indicted him for health care medical fraud in the Gene Upshaw fund case. Players often come from backgrounds without exposure to financial education, and then confront outstretched hands from those they have known while coming up.

Leagues usually offer quick financial classes, either at rookie sessions or through the clubs. Often the financial literacy is squished between other mandatory classes, or even offered by a firm that is also selling financial services.

Drew Hawkins used to do it that way when he ran Morgan Stanley Sports & Entertainment, offering financial advice with one hand, and selling products with the other. Two years ago, he left and founded Edyoucore. The company’s sole purpose is to educate players on their finances. In addition to the Ravens, clients include the University of Michigan.

Hawkins tries to keep it fun; he ran a contest between the defensive and offensive players to determine which side best filled out their “homework.”

“We challenged them to utilize the digital platform and gave them weekly assignments,” he explained.  “There are weekly installs, similar to what they get in terms of learning plays.

“The team that completed the most modules won. Friendly competition and incentive for them to knock them out. Defense, who was captained by Marlon Humphrey, won.” Team Humphrey beat Team Bozeman (center Bradley Bozeman) 34-23. Hawkins promised to take the winning team out to dinner.

“You guys are the CEO of You Incorporated,” he told the players. “So being informed around who’s on that team, making sure that you’ve done the vetting, holding them accountable for what they’re supposed to do in terms of working on your behalf, stay engaged with that process.”

The message is getting through. Jaleel Scott, a wide receiver, said he used to call his financial adviser and agent monthly. Now he calls weekly.

“Just checking in on them,” he said, “see how things are going, letting them know how I feel.”

Last month’s presentation, rescheduled several times over a month because of abrupt changes in practice times, focused on entrepreneurship. Players are eager frequently to invest in businesses, but for every success story like Roger Staubach or John Elway, there is a Ray Lewis or Terrell Owens.

“I’m trying to start a small business right now, I got one going so for me I love learning about that,” said then-Ravens defensive end Zach Sieler, who has a nascent hunting enterprise in Florida, after the Edyoucore session on why he attended. The Ravens waived Sieler earlier this month, and he now plays for the Miami Dolphins.

Running back Gus Edwards asked during the session about the pro and cons of going into business with family; while Bozeman queried about how to manage real estate investments.

The players appeared especially attuned to Moorehead, who told his story of turning away from his Ph.D. and on the advice of a fraternity brother learned the car business. He is the first African American dealer of Rolls Royces and had reached the stage of success in his life that later on the drive away from the training center, upon learning he had to make an unexpected trip to Miami that night, lamented his charter had not been arranged.

The common thread of the three: players need to learn about what they invest in. “You can’t manage what you don’t know,” Moorehead said. And he warned about the dangers of investing with family.

“Sometimes it’s good to write a check to your family and not let them come into your business,” he said. “That’s really kind of hard to say.

“I hear so much from guys in your profession who come to me, they’ll say things like, ‘I want to get my mom… I want to set her up in this. I want to set my brother up.’ And sometimes they just don’t do enough research to determine what’s best for them.”

Scott’s message was to protect intellectual capital. He recalled in production meetings when he appeared on CBS’s NFL pregame show floating ideas that he said were stolen on air by other broadcasters.

“I’d just be in the pregame meeting, blabbering this is this, this is that, and then the guys would go on stage, and sometimes you would see me sitting at the desk and look at, what, he just stole my stuff,” Scott told the players.

“I told them everything I knew. That’s how I’ve always been built. Sometimes you gotta make sure that you keep your intellectual property to yourself.” Scott is an adviser to Edyoucore.

McClain’s words of wisdom: Don’t assume the employees work as hard as the player. In his fifth year in the league, McClain bought some real estate in Philadelphia and hired a friend to manage it.

“I assumed that people worked as hard as I worked,” he said. “I literally assumed everybody was willing to wake up at five o’clock and go to sleep at 12.”

Two years later, he switched to a professional managing agent. 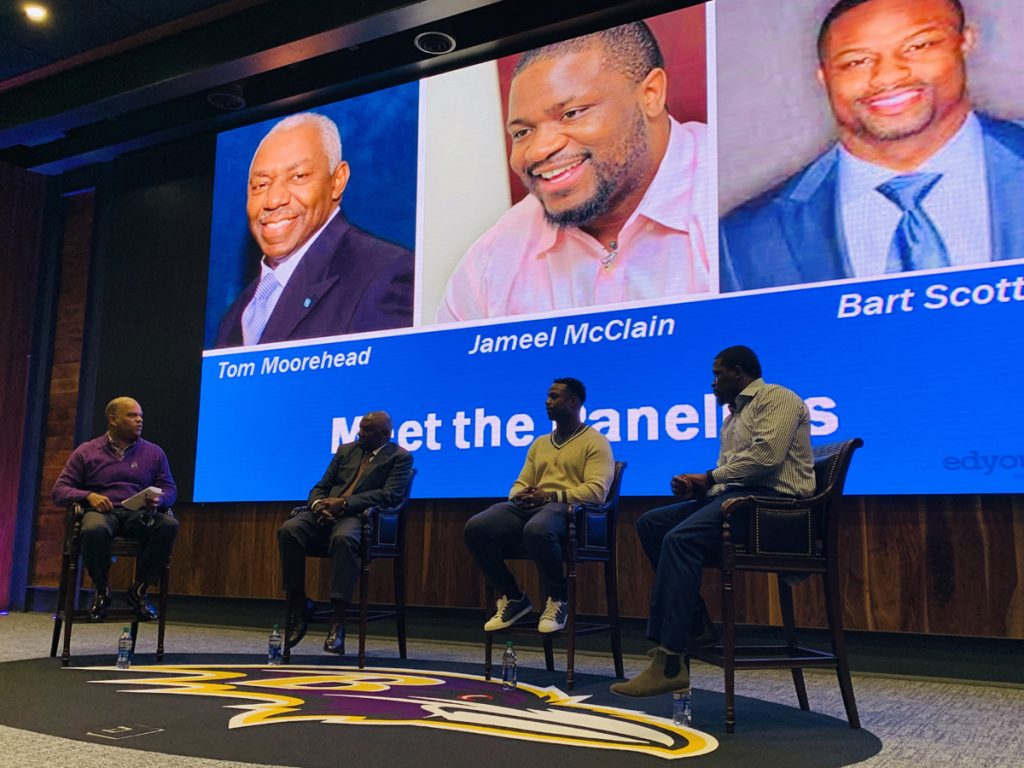 The session ended with a pep talk from former player Keith Elias, now the NFL’s senior director of player engagement.

“It’s seeing yourself right, seeing who you want to be when this thing is over, seeing the end during the beginning,” Elias said.

“Every day we watch film, right? You watch the film, you get to be a better player, you visualize the game, you visualize your steps, you visualize your reads, and that vision helps you be successful,” he said. “The definition of wealth is someone who lives beneath their means. It’s not what you make, it’s what you keep. Right? So…have a vision for your life financially.”